We are a thriving Club with over 50 members who enjoy the French national sport of Pétanque (Boules).

But, did you know that the sport is played around the world by over 200 million people and is likely to become an Olympic Sport in Paris by 2024.

Established in the centre of town at The Pierhead, close to Bettys Tea Rooms, our facilities are in daily use from March to October (and as weather permits though the winter) as a public facility for all to enjoy.

Pétanque is a sociable sport for all ages and abilities, and it is very easy to learn how to play. It primarily involves natural hand eye co-ordination is the same way you learnt to play ‘catch’ with a ball, as a child.

Yes you do need to have your own boules, or they can be hired from the Oxfam Shop, just down Montpellier Hill from Bettys, and open 7 days a week.

From late March to late October there are Club evening sessions from 6 pm onwards.

These are on Tuesday and Thursday until dusk.

Our ‘home’ dates from the late 19th century and was built as a viewing gallery over Montpellier Gardens. This was laid out as a glimpse of the Yorkshire Dales and there are still one or two limestone boulders in the borders below The Pierhead. 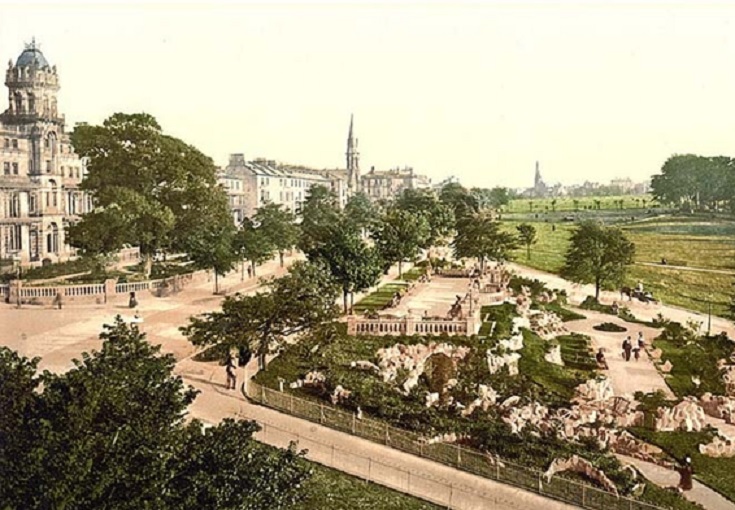 Another image from around 1900 shows the Pierhead with ‘wall to wall’ bath chairs as visitors flocked to the Spa to ‘take the waters’!

Today it looks very different as a Bouledrome for Pétanque and laid out with 4 pistes (courts).

These are about 13 mts long by 3 mts  wide. There are two pistes is each terrain.

(There is a path between the terrains for the stairs down to the gardens below.)

Sadly, the need for total public safety in such a public area requires the terrains to be fenced off. That does not reflect on the accuracy of the players, but the risk of anybody deciding to take a short cut!

Because of the nature of the surface, even a 700 gm boule will not bounce more than a few inches off the ground and one has never left the court in play.4

The facilities provide for 4 games to be played at a time and can be played as singles, doubles or triples with three players in each team

To avoid confusion Pétanque and Boules are one and the same, and there are several other sports around the world from the same origins – as are lawn and crown green bowls.

The game of rolling or throwing balls at a target can be traced back to at least Ancient Greece.

The iconic image of Sir Francis Drake playing ‘bowls’ on Plymouth Ho, awaiting the arrival of the Spanish Armada was probably more akin to ‘pétanque’, and the most likely source of the projectiles was as ‘cannon balls’!

The aim of each play is, by the end when all the boule have been thrown, to have your boules closer to the coche (jack) and score points for the number that finish closer to the coche than the first of the other teams.’. So the team winning the toss can decide to throw the coche (jack) at least 6 metres from the point where they are standing, and no more than 10 metres.  The coche is either wooden or plastic, and is about an inch in diameter.

Boules are metal and can vary slightly in weight, diameter and hardness.

Both diameter  and weight are a matter of personal choice governed by hand size and strength.

The team throwing the coche, have the first boule to get as close to the coche as they can.

Boules must be thrown underarm and usually with the hand on top, as in the picture. This mean that when you release the boule, when the arm is about horizontal, you create backspin to control the distance it rolls.

The other team throw their first boules and will continue to throw until they are closer to the coche.

Aiming and throwing at the coche is called ‘Pointing’.

The alternative, if the opponent is very close to the coche, is to ‘Shoot’ their boule out of the way.

Once both team have thrown all their boules there is a check and measure to agree the number of points that the team has scored for their boules closer than the nearest of their opponents.

A game is the first team to 13 points.

Pointing is a relatively natural skill, based on hand/eye co-ordination and most beginners can be playing a competent game within a few minutes of picking up a boule. Because of the nature of the terrain as a rough, uneven surface, tossing is a more reliable action to rolling.

It is also similar to putting in golf, where you read the contours and borrows of the piste to ‘find the line’.

Shooting is a far more acquired skill to be pin point accurate to hit a 3 inch target from up to 10 metres.  Bur very rewarding when you do!